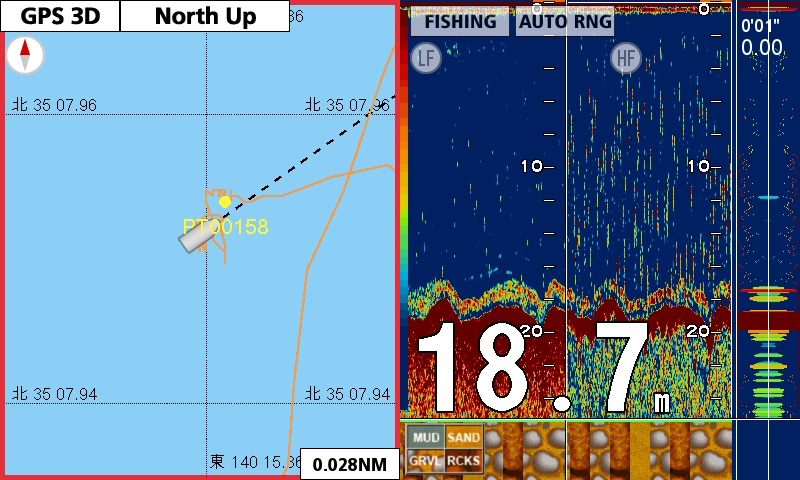 Echo of Japanese barracudas located within 2m above the seabed.

This screenshot was taken while the boat was stationary. On the left side of the fish finder image, you can see what captured echoes look like at 50 kHz and on the right side at 200 kHz.

The echo at the bottom of the screen, within 2 meters above the ground, is that of a school of Barracudas.
More precisely, after pulling the line, half of them were Red barracudas and the other half were Japanese barracudas.

The place where I would like to draw your attention on this screen is the line representing the bottom of the sea. Logically, if you place the boat in a specific location, stationary, then the seabed should remain flat on the screen.
This is because the ultrasonic waves are sent to a specific point and, since the boat does not move, the objects being reflected will stay the same as well.
*On a fish finder, the seabed is scanned vertically at regular intervals and As time passes, it is the echoes of these already scanned objects that are reflected on the screen. This is why, if the boat is stopped at a specific location, the scanned seabed will always be the same and therefore, the echo of the seabed displayed on the screen will form a straight line because it is invariant.

Returning to the Barracudas, they were fished in about two minutes and the echo of their school disappeared immediately after fishing them. Barracudas are migratory fish, so this means that they do not stop at a given place but that they are rather passing through.
In order to find even more fish, the boat was moved to another location. and echoes similar to those we have already encountered appeared. Again, these were Barracudas whose echoes disappeared right after being captured and pulled out. Bad luck for them!

On the screen, you can also notice the presence of vertical lines crossing the screen. These are actually interferences caused by an ultrasonic wave machine installed on a nearby boat.
It is possible to easily suppress the noise of this interference using a suppression function on the device, but by doing so, you run the risk of significantly reducing the returning echo of Barracudas themselves. Therefore I had decided to disable the noise suppression function.

Japanese barracudas are seasonal fish because they are migratory so let's use the fish finder as best we can in this short timeframe.

Kamasu (Japanese barracudas) are a gregarious fish species that swim in schools. These fish can swim 5m under the sea surface or dive more than 200m to catch their prey, which mainly consists of sardines.
One of the main characteristics of these fish is that they form large schools that move very quickly to escape predators. Although it is easy to detect a school of Kamasu with a fish finder, due to its size, their very high moving speed requires to anticipate their movement and place the bait in their swimming path before they come. Thus, it is advisable to quickly drop the bait, especially when these fish are at great depths near the seabed. If you use a fishing rod with several hooks, it is recommended to wait until most of the hooks have caught their fish rather than pull out the fishing rod as soon as the first fish is hooked. In addition, if fish swim in the upper layers, near the surface, and you have the opportunity to visually check their presence, you can predict more easily their trajectory and therefore catch them, using lures.