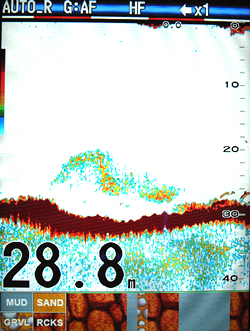 Take advantage of your fish finder to target Broad squid and let it help give you information to anticipate your targeting Broad squid's behavior!

The screenshot was taken with the boat moving at a speed of 0.5 knot, and the fish finder was set to transmit at 200 kHz, with bottom zoom enabled.

Broad squid is one of the most difficult kinds of echoes to display and interpret on a fish finder. It is not only because of the fact Broad squid have a habit of changing its living strata according to the season, but also because of its body structure. All squids have a similar physical make up and do not have a swim bladder in their stomach. To add to the difficulty of detecting them, their body is almost the same density as water, making the reflection of ultra-sonar echoes subtle and weak. Moreover, Broad squid do not swim in a school, which results in making it far more difficult identify squid with a fish finder.

Nevertheless, we have to note here that a fish finder is not useless when you are targeting broad s quid. We can utilize the fish finder to search out places where Broad squid are likely to come gather. Usually the best fishing spots for Broad squid would be around rocks on the sea bottom. The key question is where are the bait for squid, such as small fish and shrimp, swimming? Also, another thing to consider is what is the enemy of Broad squid and where do they swim? Answers to all these questions will be vital to locate where your targets are and your fish finder is the answer key.

This underwater image shows plenty of facts that this place contains many elements that will attract Broad squid. One of the examples is that there are rocks, which are a great place for small fish and Broad squid to hide themselves from their enemies.

This shot was taken in 15 m depth of the diving point. The clarity of the water was not good, however, we still can see many Broad squid swimming. Swimming strata was approximately 5 m below from the sea surface.

For some reason, Broad squid is commonly thought to swim in the bottom strata of the water. This is a misconception that every squid hunters need to cast aside. Search for different strata according to individual seabed situation.

Also, when you find enemy of Broad squid beneath your boat, give up on that fishing spot right away and move to another potential hot spot.