Team FURUNO, First Challenge of the Year - at the Tokyo Bay 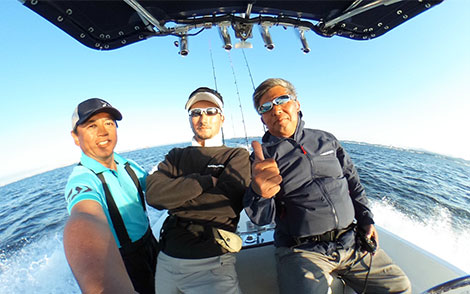 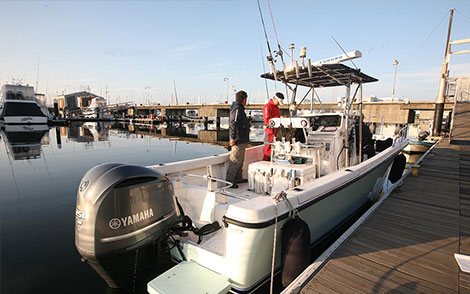 Bay fighter is a center console boat which is suitable for boat fishing. It is fully equipped with fine marine electronics.

Today’s challengers onboard, Team FURUNO, were strongly determined to catch the red sea bream, tasting a bitter memory of failing to do so last year. FURUNO’s field tester Nobuyuki, the captain of Bay Fighter Akihiko, and FURUNO angler Eisuke, launched at the Yokohama Bay site Marina at 6 o’clock in the morning, with high hopes and an unstoppable passion. 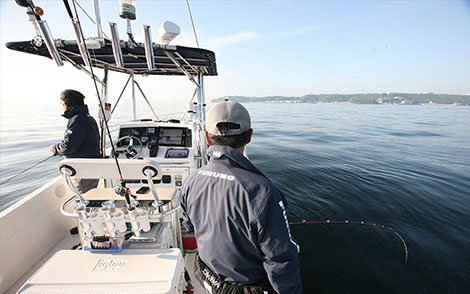 The sky was clear, and the sea was still. The conditions could not be better for fishing. After 15 minutes of sailing, we slowed the boat speed down to 3 knots. Victory on the day seemed a sure bet, as we were armed with FURUNO’s latest DFF-3D Multi-Beam Sonar, which should help to give us the right direction of the fish echo to our boat. But, no matter prepared you are, even if you can see 200 m down, 120-degree port to starboard and 300 m down directly under your boat, you never see the result of the game until it is in the boat.

Five minutes after searching for our fishing hot spot, we targeted an echo which seemed like a red sea bream on the right side of the boat. We moved our boat to the right, so we could catch the echo from just below our boat. Let the hunting begin. Our hearts were beating faster, anticipating a big hit.

First we tried to tempt our game to bite our bait. Following the theory, we retrieved the bait soon after it touches the bottom, and pulled up with the speed of 1 m up per 1 sec. After bringing it up to approximately two times higher where the echo was, we dropped down the bait down again. Repeating this procedure is a basic tactic for catching red sea bream. The speed in which you retrieve is one of the keys. We tried various speeds of retrieval from slow to fast, but there was no hit. We circled around to look for more echo, however, we ended up without a single hit. Full tide hit at 8:47.

We knew it was bad timing, because of long tide, and we determined that there would not be any hits, even if we kept on fishing. We decided to stop fishing for red sea bream at this point and move to another area- Kanaya offshore to hunt horse mackerels instead of red sea bream.
On the way moving, Captain Udagawa found an echo and caught a big mackerel. The Multi-Beam Sonar steadily did its job, painting a picture of what was all around our boat.

Second Struggle of the Day - No Matter What the Target is… 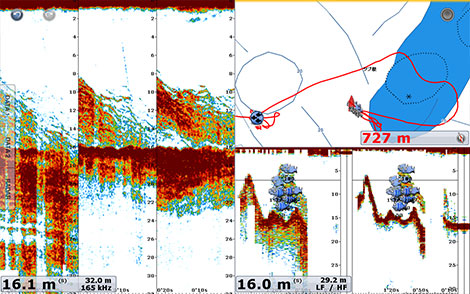 The echo of horse mackerel targets can be seen in the middle of the upper left screen. It stayed there for a while, which indicates that the sea current was still.

Soon after that, we saw a fish echo, which seemed likely to be horse mackerels, above a risen seabed around Kanaya offshore. We dropped Sabiki bait and waited, but there was no reaction. Next we changed the bait to Euphausia and spread mushed sardine.

Still, there was no reaction and we were becoming desperate. We were at the full tide, but we were not going to allow that to be a reason we could not bring in a good catch. The crew huddled up to discuss our options and a decision was made to return to the challenge of targeting red sea bream, as the horse mackerel were not biting anyway. We decided to go back to where we were first fishing.

On the way back, we noticed that red tide was occurring on the sea surface. This might have been one of the reasons that we were not successful. Even with the latest fish finder equipped on the boat, we could not do anything to change the fish’s habit.

Everybody was disappointed, but captain Udagawa was not giving up. He proposed that we search for our target by drifting the boat in a wide area. We all agreed, clinging to this last hope.

Who Won the Game after a Long Day of Struggle? 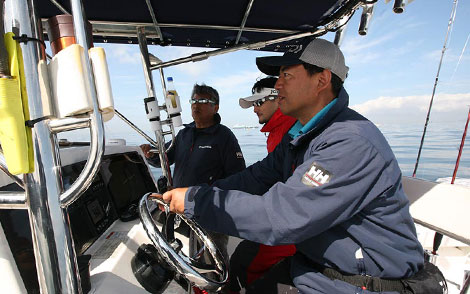 We turned our way back to its beginning. “We are here to fish red sea bream!”

Three anglers lined up on the starboard side while the boat was drifting to the north, Drift fishing is a strategy to swing our bait across the swimming strata of red sea bream, hoping to appeal to them with a wider spread for a longer time. At 14:20, Angler Ono felt a long-waited hit from the edge of the rod. After feeling twice or three times clicking, he felt the weight of fish. He was gaming for 5 seconds, but the target fish managed to pull itself off of the hook. We were speechless. 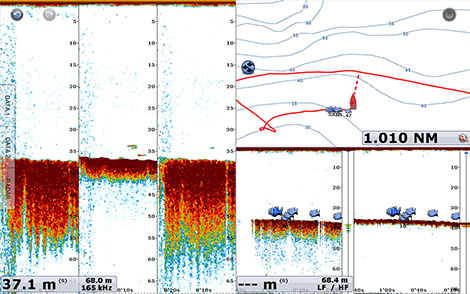 Ono was pulling up his bait to around 10 m depth seeing the echo around 5 m depth. 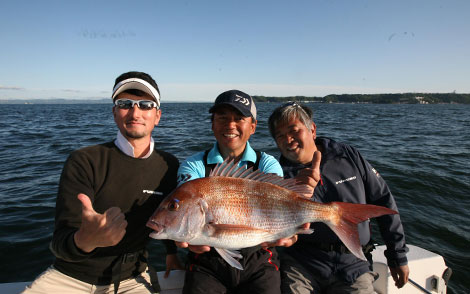 Fishing brings us a feeling of joy, excitement and achievement.

“Just one more time, one more hit!” Captain Udagawa said, “Hang in there guys, we have got to do this today!” His yell fired Team FURUNO up.
Like a wish coming true, another chance was given to captain Udagawa as he had a sea robin on the line. Sometimes the smallest start opens the door to the biggest opportunities. Ten minutes later, angler Ono was pulling up his bait to around 10 m depth. Suddenly he felt weight on the rod. He was confident that it was a big red sea bream on the other end. “I will never let you go!” he cried. The fishing line was very tight as the wind was pushing the boat away. Captain Udagawa supported him by shifting the boat’s directions. After a hard fight of around two minutes, a big red sea bream appeared on the water.
Once Angler Sekine managed to net the red sea bream and bring it aboard, the boat exploded with cheers and excitement. We won the game! We high-fived and shook each other’s hand and soaked in the moment. We almost gave up catching red sea bream, but the victory was ours, as we clung to hope until the last minute. A red sea bream made the Team FURUNO members’ day. Everyone’s face was filled with satisfaction and achievement. Victory on the sea is priceless.