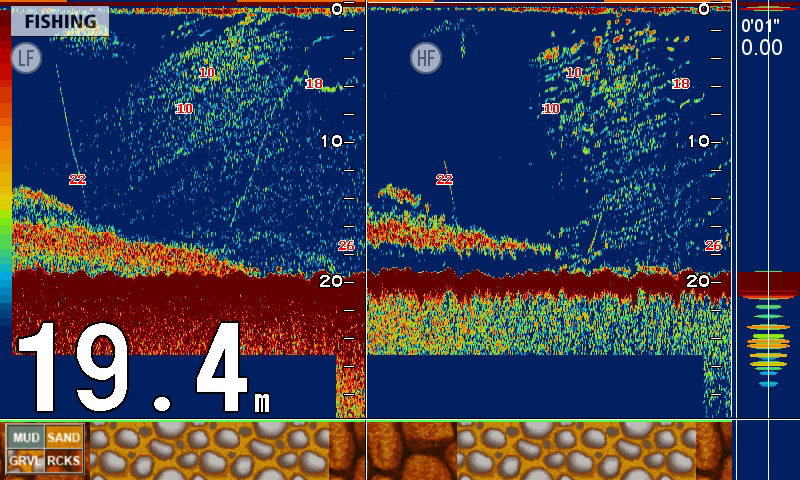 Sometimes there is a reason it’s worth trying, even if you are not clearly seeing individual fish echoes on the screen.

This screenshot was taken while the boat was moving at a speed of 0.5 knots. On the left side of the fish finder image, you can see what captured echoes look like at 50 kHz and on the right side at 200 kHz.

To begin, we were looking for a fishing spot with the boat while travelling at a speed of 3 knots. Although we did not see typical yellowtail amberjack-looking echoes, we decided to setup our fishing spot here. The reason we stopped was that a big echo of schooling fish, which yellowtail amberjack prefer for its bait, were displayed on the screen.

Another reason why we setup here as our game field for today was, the individual fish sizes displayed from the ACCU-FISH™ output in the middle strata to the surface were approx. 10 cm and these could be assumed to be Japanese anchovy.
(Also, an underwater picture was taken by a scuba diver and we could see yellowtail amberjack in it. The yellowtail amberjack were chasing after the Japanese anchovy at almost invisible speed.)

The size of the yellowtail amberjack we finally caught were in the 60 cm class, but we could not catch the figure with the fish finder, since they were very fast and quickly moving from one direction to another. Even though the anchovy was moving quickly trying to escape from its predator, their schooling habit allowed our fish finder to receive more echo reflections to display on the screen.

One interesting thing the scuba diver told was, the yellowtail amberjack was not just chasing after the fish school; but it would sometimes stay back at a distance to pretend that it was giving up chasing the fish school, and then in the next second it started attacking again suddenly appearing from out of nowhere.

Hiramasa is usually distributed in tropical and temperate seas south of Hokkaido, mainly in coastal and shallow waters. As you can see in this video, this fish often swims alone or in small schools and prey on migratory sardines, horse mackerels and chicken grunt gathering around peaks and rocks. In the first half of the video, the Hiramasa is about to launch his attack on a school of juvenile chicken grunts. In the second half if this video, the 1-meter Hiramasa swims slowly 7 to 8 meters below the sea surface, but once it has spotted potential preys, the Hiramasa will quickly begin to chase the baitfish with great agility. Because of the speed of this fish, sometime swimming at up to 50km/h, it is not easy to pull the line once captured, while at the same time, it is necessary to keep the fish away from the reefs if you want to avoid the risk of having the line cut by a rough rock. It is a big fish that can be found near the coast, making it one of the most popular target for all sport fishing lovers.