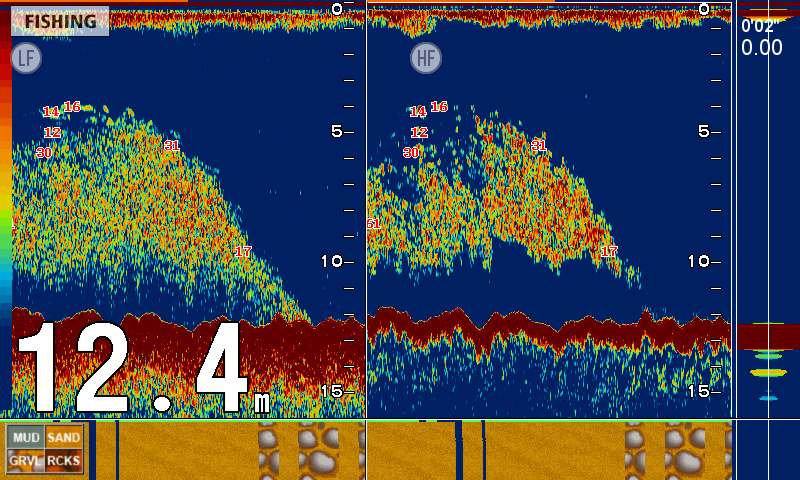 As the boat was moving forward at a slow pace of 0.2 knots, the screenshot below was captured. The left side shows echoes in 50 kHz, and the right side 200 kHz.

After dropping a sabiki lure and reeling in a catch, I could confirm that this school of fish consisted of horse mackerel. Its size was about 10-15cm, roughly the same as indicated by the ACCU-FISH function. This school of horse mackerel swam rather slowly, it took almost a full minute for it to pass below the boat.

With a depth of 12.4m and a slow moving school of fish, it seemed very likely that Olive flounders might be in the same area. With a horse mackerel I caught I made a live bait that was dropped into the water, the result was almost instant. I caught three Olive flounders, considering the short time spent, I was very happy with such a large catch.

The Olive flounder lives and feeds on the seabed, and the waters immediately above it, making them extremely hard to detect with fish finders. They can be detected when feeding, leaving the seabed to catch prey, however it’s very difficult to correctly identify such echoes as Olive flounders. In order to catch Olive flounders, the recommended method is to search for schools of fish that the Olive flounder preys on, and use them as live bait.

To find suitable schools of fish, using a low frequency of 50kHz is recommended, due to the wide beam width making it easier to search larger areas. Another tip for finding suitable spots to fish Olive flounder is to use the a-scope on your fish finder, since it provides you with real-time data. You can use the real-time data to confirm that you are in a good position.