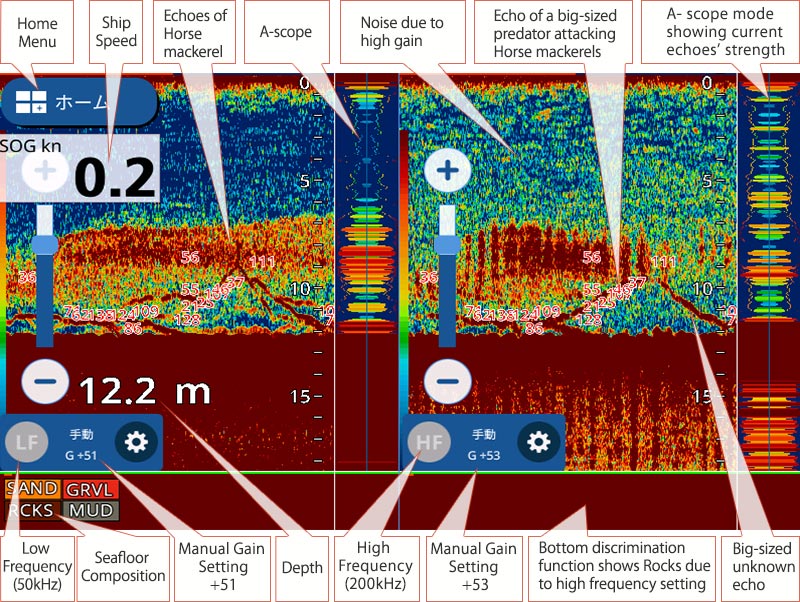 You can see that the Horse mackerel echo has disappeared following the appearance of this unknown predator.

The screenshot was taken while the boat was stationary and anchored. On the left side of the fish finder image, you can see what captured echoes look like at 50 kHz and on the right side at 200 kHz.

On the screen, the seabed appears flat due to the stationary position of the boat which is anchored. When the boat is stationary, the wave from the transmitter hits the same point on the seabed and the echo returns from this same location. This is why the seabed forms a straight line on the screen.

The echo we see on the screen is probably that of a group of Horse mackerel, but since the boat is stationary, the fish school will form a straight line on the fish finder just like it does for the seabed. It is rare for a fish echo to be this long on a fish finder.

As you can see in the picture above, the Horse mackerel swim in school, moving back and forth under the boat continuously. Normally, the echo would appear and disappear on the screen.
To attract and catch some Horse mackerels, we use bait and drop them around the boat.

This time, the reason why Horse mackerels disappeared is not due to the lack of bait but to the presence of a potential predator.
On the screen, I could see that an echo had appeared and that he was slowly going up to chase the fish school before going back to the seabed. This is the typical behaviour of a predator. I suspect this fish to be a Japanese flat fish (Hirame) but that's just a speculation.

Many anglers turn off their fish finder once they are anchored, but the fish finder is extremely useful in monitoring changes on the seabed and anticipating the situation. I recommend using a fish finder even when you are at a standstill.

Footage of a school of Japanese horse mackerel Swimming around a reef. Japanese mackerel is one of the easiest fish to catch with a fish finder, due to the tendency of these fish to gather around high reefs and peaks under the sea.
Because they move in a circular way around reliefs, these fish are generally not to be found at the top but rather a few meters below it. Although these fish are easy to find with a fish finder, it is not so easy to catch them. As illustrated in this video, this is particularly difficult when there is no current. When you look more closely, you will notice that the fish are not carried by any current and that they are just floating in a stationary manner. In principle, when there is a current, the fish swim in the same direction against this current, but sometime, as shown in this video, when there is no current or little current, the fish swim in all directions and scatter, ignoring the bait. In other words, These are easy-to-find, however hard-to-catch fish.