What can we learn from this Fish Finder screen? 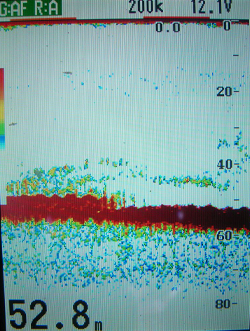 This screenshot was taken while the boat was drifting at a speed of 0.5 knots. The Fish Finder was set to transmit at 200 kHz.

Today's target was the Japanese horse mackerel. They form fish school when swimming around, and inhabit rocky area where the sea current goes through.

Let’s see how to look at the Fish Finder screen. Since the boat was in very slow motion, the echo of seabed is kept almost flat. (Reference: Fish school display during mooring and brief stops) Bottom trail on the left half of the screen is comparably longer than that of the right half, which makes it easier for you to guess that this is a rocky area. But if you assumed the seabed on the right half is a sandy area because the trail on the right half of the screen is shorter and the structure is flatter, that is unfortunately a misinterpretation.

Footage of a school of Japanese horse mackerel Swimming around a reef. Japanese mackerel is one of the easiest fish to catch with a fish finder, due to the tendency of these fish to gather around high reefs and peaks under the sea.
Because they move in a circular way around reliefs, these fish are generally not to be found at the top but rather a few meters below it. Although these fish are easy to find with a fish finder, it is not so easy to catch them. As illustrated in this video, this is particularly difficult when there is no current. When you look more closely, you will notice that the fish are not carried by any current and that they are just floating in a stationary manner. In principle, when there is a current, the fish swim in the same direction against this current, but sometime, as shown in this video, when there is no current or little current, the fish swim in all directions and scatter, ignoring the bait. In other words, These are easy-to-find, however hard-to-catch fish.