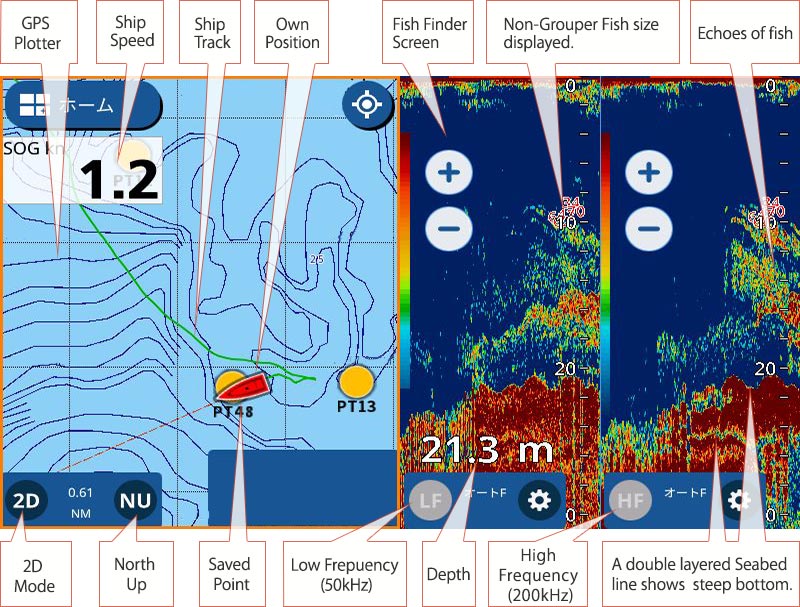 The bottom of the sea is mostly composed of steep rocks, inhabited by many crustaceans, grouper's main preys.

I slowly follow the fishing spots I have saved on my GPS system and start recording my screen. The data displayed on the fish finder are obtained thanks to the use of both 50 kHz and 200 kHz ultrasonic waves.

The image is a screenshot taken as I approached the fishing spot where I caught Grouper by SLJ (Super Light Jigging).
The Grouper feed mainly on shrimp, crabs and other crustaceans and small fish. Therefore, Grouper can be found near rocks and other similar steep terrain that form the perfect habitat for their preys. On the screen, we can notice the presence of Grouper echoes above the rocks, but when observing them while diving, we notice that they also occupy the spaces between the rocks.

It is possible that they took refuge between the rocks because they got scared when they saw the diver. It is known that Grouper are even more cautious than rockfish who occupy the same kind of place.
It's fairly easy for our fish finder to catch echoes of fish swiming right above the rocks, but it's much harder to detect these fish as they move between the rocks.
This is because ultrasounds, being ultra-sensitive, are easily reverberated by any obstacle that crosses their propagation route such as the surrounding rocky outcrops and steep reliefs.

For these reasons, it is recommended not to look directly for the Grouper, which are very difficult to spot, but rather to look for the kind of place they are hunting small fish and crustaceans. Until you find your first fish, it is better to look for the area rather than looking for the fish itself and for this reason you should sail very slowly.