HOME Catching up with fish Greenling 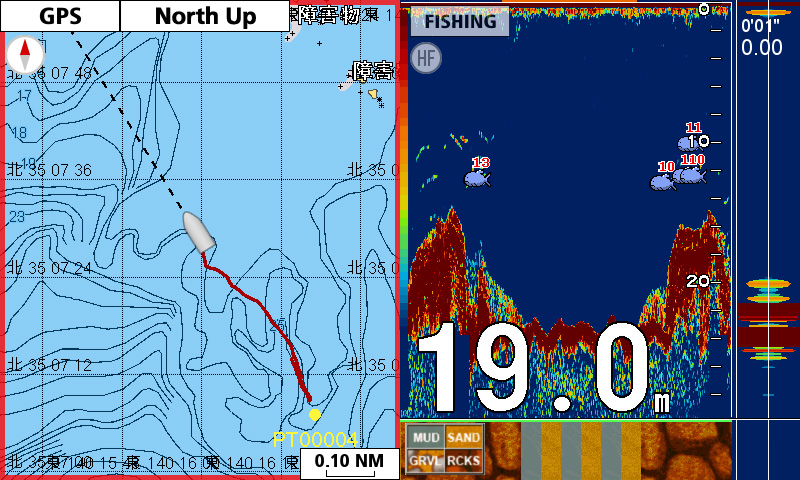 By comparing the fish-finder screen with the GPS chart’s contour (bathymetry) lines, it is much easier to imagine the seabed structure and landscape.

The above screenshot was taken with the boat moving at a slow speed (0.5 kn) and the fish finder was set to transmit at 200 kHz, with bottom zoom enabled.

The tackle used was Tenya, a sinker+hook combination, used mainly in Japan, with a spinning reel. A Tairaba rubber jig was also used and the combination was enough to attract and catch Greenlings.

Greenlings favor coastal reefs and wrecks, covered heavily in seaweed, at depths between 5 meters and 50 meters.

Now, let’s compare the seabed, as shown on the fish finder, with the GPS chart’s depth data. The fish finder shows the latest data on the right of the screen and scrolls to the left as time goes by.

The seabed composition around the example area is a mix of mud and sand, with a depth of 25 meters.

A GP-1870F with chart functionality can help you anticipate seabed composition thanks to its detailed contour line and depth information.

When looking for Greenlings in their natural habitats, it’s recommended that you use a GPS chart to help anticipate abrupt depth changes and avoid snagging your nets or lines.