What can we learn from this fish finder screenshot? 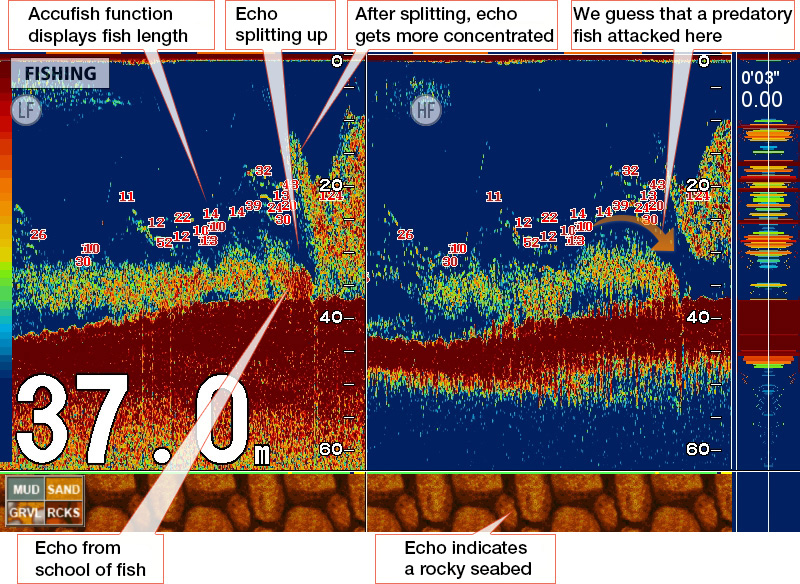 A fish school echo breaks up, right after that we can see that the concentration has increased.

This screenshot was taken at a speed of about 0.3 knots, the left side of the screen shows echoes at 50 kHz and the right side at 200 kHz.

I caught a 35cm Greater amberjack at the spot shown in the screenshot above. Greater amberjacks feast on small fish like mackerel, so utilizing live bait or jigging with lures similar to their diet are good ways to catch them.
One must when fishing for Greater amberjack, is to find locations with good currents, where large schools of small fish gather. However, just because you find nice schools of baitfish, does not automatically mean that you will find Greater amberjacks. Since they are a predatory fish, they are much more scarce in numbers.

A way of telling if there are Greater amberjacks in the school of fish you've just found, is to look for single fish echoes on the fish finder screen. The fish finder screenshot shows a school of fish close to the seabed. With the accufish function, we can see the size of individual fish around the large school. Accufish can of course be used just for getting the size of fish, but more importantly, you can use it simply to identify whether there are any individual fish present at all.

There is one good way to identify the presence of Greater amberjack, you can actually see it directly on the fish finder screenshot. That is, the sudden breakup of schools of fish, with some reservations. Since your fish finder always looks at what is straight below the boat, there will be times when the echo of schools of fish break up, such as when your boat is drifting away or when schools of fish migrate. The thing you should look for is echoes breaking up, and immediately afterwards show up with greater concentration. This tells you that a Greater amberjack might be out hunting.

I've studied the feeding habits of Greater amberjacks when I've been scuba diving, they attack schools of small fish, which instantly scatter upwards or downwards in the water column. The fish that scatter upwards will show up as a highly concentrated echo on your fish finder screen. When the Greater amberjack has finished attacking its bait, it will withdraw for a while, observing the school of fish. Once the school of fish has become satisfactorily concentrated again, the Greater amberjack will attack again and again, repeating the whole process. I was surprised to see just how efficient hunters they are.

One last reminder though, whenever you find a school of small fish, there will always be other predatory species feeding, such as amberjack, sea bream, john dory and so forth. So while you may never be entirely sure, if you fish during the late autumn towards the beginning of winter, chances are high that you'll end up with a Greater amberjack on your hook.

Kampachi, better known as Greater amberjack, is a fish that migrates in schools until its weight reaches 4kg, after which the fish becomes solitary. The Kampachi can be found in tropical and temperate waters, but mostly in the south of the Tohoku region of Japan. This fish lives around rocky reefs at a depth of 10 to 150 meters. They prey on sardines as well as horse mackerel that live around high peaks. Whenever you spot a school of baitfish, you can be almost certain to find large predators such as Greater amberjack in the area and the chances are particularly high when the baitfish are schools of sardines and horse mackerels…