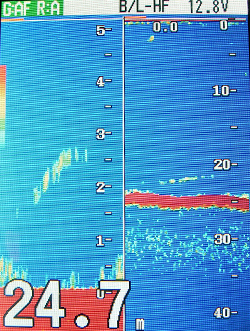 The “Bottom Lock Display” mode shows you the seabed as straight line, making it easier for you to identify seaweed and bottom fish.

This sample was taken at a speed of about 2 knots, with the fish finder set to 200 kHz and zoomed in bottom view.

If you look at the right side of the fish finder screenshot, you will see a faint echo about one meter tall. Judging by the color of the echo, we can guess that it is comprised of something different than the seabed, which is shown in bright red. The left side of the fish finder screen shows the seabed enlarged, you can see clearly that the echo differs from the seabed. The left side shows the seabed and five meters up. The aforementioned echo can be seen right above the seabed, and we know that it's not the seabed, since its composition results in a faint echo.

Based on my own diving experiences, I would guess that the echo represents a sandy seabed with floating seaweed. In this sandy/muddy seabed, it's common to find Japanese whitings, gobies and different species of shrimp. They prefer sandy seabeds, but stay hidden within the seaweeds in order to not attract predators. Cuttlefish pray on these different species, and can usually be found around structures on the seabed. I've observed while diving that they rarely ever swim up more than about two meters from the seabed. They lay motionless while waiting for prey to pass by, striking when opportunity arises. This kind of behavior makes it very difficult, near impossible to detect Cuttlefish with a fish finder.

Instead, the best way to fish for Cuttlefish is to use the fish finder to find structures on the seabed and baits that the Cuttlefish preys upon. With the “Bottom Lock Display” mode turned on, the seabed is displayed as a flat structure, hiding any variations in height, thus making it easier to identify targets right next to the seabed. If you use it to search for good baitfish and seaweed, you can be sure to find Cuttlefish sooner than later.

You can use the bottom zoom to check so that your line does not get caught up in seaweed or obstacles. Increase your chances of getting the catch by learning your fish finder and how to best utilize it's different modes and functions.